I had the idea of having white pixels that would light up at positions of the corresponding pixels from a video stream. At first I tried to do everything within canvas without extra libraries, but after noticing the low frame rate (-20 fps) I decided to add Three.js and use some WebGL. It helped me to boost the frame rate back up around 60 fps. I added some controls, so you can play around with the experiment. The depth is not based on the real depth, you would need a kinect for that, instead it is based on the values of the pixels. 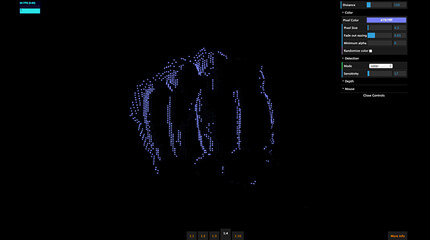